The kids were busy filling their book boxes with fiction texts this week, as we launched a new unit in reading.  In this unit, titled "Bigger Books Mean Amping Up Reading Power," instruction focuses on three important foundational skills: fluency, literary language, and tracking longer stories.
This week the focus was on fluency.  Now that children are reading substantially longer books, practicing fluency is especially valuable, as it is key to comprehension.  The kids learned that rereading, especially out loud, is the best way to change the reading voice inside their heads.  "Reading with a clear, smooth voice inside one's head is a key to reading better, stronger, longer, and with more understanding." (Lucy Calkins)
The kids were reminded to use all the clues the author provides to read with their best reading voice.  The kids practiced scooping words in phrases, noticing punctuation, using dialogue tags, and paying close attention to the characters and matching their voice with the appropriate tone.  I am pretty sure that our minilesson on dialogue tags was the favorite of the week!  Be sure to ask your child about this fun activity.
Next week, my instruction will shift to providing kids with the tools they need to tackle the figurative language they are beginning to encounter in their books.
I continue to be absolutely thrilled with the enthusiasm the children have for books and reading.  I am especially impressed with the growth in their reading stamina since September - something to be proud of for sure!  Bravo!
Posted by Mrs. Moll at 12:21 PM No comments:


We have spent the past several weeks learning about the Arctic and the animals that inhabit this part of our world.  The kids recently completed a culminating project, showcasing their learning during this unit.
Our initial lessons focused on the geography and climate of the Arctic, as well as the people and animals who live there.  Using their newly acquired background knowledge, the kids then had an opportunity to select an Arctic animal they were most interested in researching for a special project.  I was absolutely amazed at how focused and engaged the kids were as they used iPads, books, and articles to gather information about their chosen animal.  The kids learned how to use “dot jots” to help them record their learning as they gathered facts about the animal’s physical characteristics, its’ predators, its’ prey, and a variety of other interesting information.  The kids used their “dot jot” research to create a report that taught their audience about an Arctic animal.  I was absolutely amazed at how easily the kids used their notes (dot jots) to compose complete sentences in their reports!  This is quite a sophisticated skill for a second grader.  Bravo!
After the writing was complete, the kids created an “Arctic Explorer” art piece to accompany their research.  Students recorded their Arctic reports on Seesaw and then attached a QR Code to their “Arctic Explorer” for all to enjoy.  Please look for an Arctic Explorer post in your child’s Seesaw portfolio. 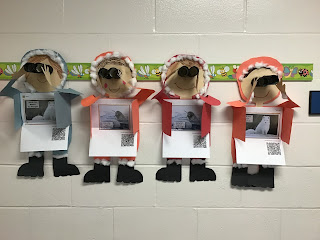 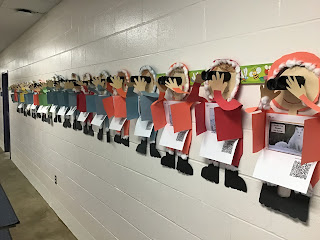 We were treated to a special visitor today from the Audubon in Falmouth.  We learned about the many ways animals adapt to survive our cold Maine winters.  Be sure to ask your child about animals that hibernate, migrate, are active, or are dormant during the winter months. 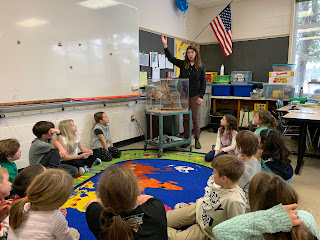 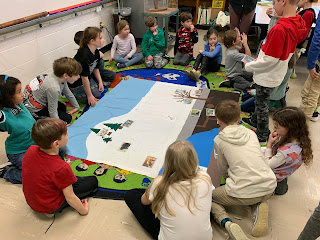 The kids have been busy "building" snowmen during our math time.  This project allowed the children to see the connection between repeated addition and multiplication.  The kids used playing cards and their great math thinking to create a snowman.  They flipped a card and recorded groups of three based on the number they flipped.  For example, if a child flipped the number 5, they recorded the fact, 5x3, and then recorded five groups of three.  They solved the fact by using repeated addition, 3+3+3+3+3=15.  Finally, the kids used the class snowman poster to determine what body part to add to their very own snowman.  The children were extremely engaged in this activity as they worked to see how many turns it would take to complete their snowman. 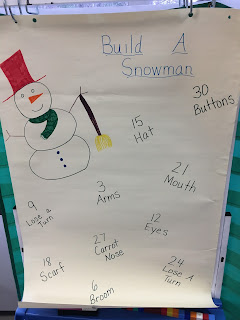 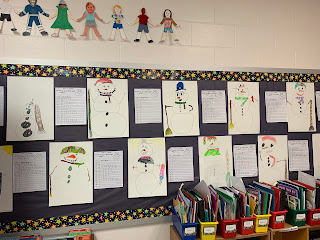 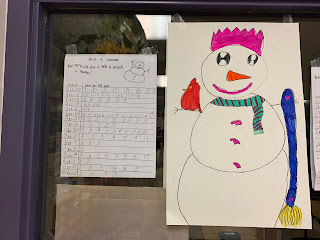 We are immersed in nonfiction during Writer's Workshop and the kids' enthusiasm is certainly contagious!  The children are bursting at the seams, eager to share their areas of expertise as they craft nonfiction books.
I began this writing unit by directing the kids' attention to the nonfiction section of our classroom library.  I pointed out that none of "their" nonfiction books could be found on the shelves and that the only way to fix this problem was to begin writing nonfiction of their own.  I used this as a springboard to encourage the children to choose nonfiction topics on which they are already an expert, and with some scaffolding, the writing began!
During the second minilesson, the kids each chose one nonfiction book from their book box to use as a tool to study another nonfiction author, noticing the interesting things they do to teach the reader.  The kids quickly noticed many interesting ways to teach a reader about a topic, including the use of diagrams, using a table of contents, including a glossary and bold faced words, and including fun fact bubbles.  I encouraged the students to use these ideas, to borrow these "craft moves" in their own nonfiction writing.  I was absolutely amazed at how quickly the kids were able to include these sophisticated text features in their own pieces!
After several days spent crafting nonfiction books, I introduced the Information Writing Checklist to the children.  This is a wonderful tool that teaches the kids to reflect on the nonfiction writing they have completed and to set a goal for themselves moving forward.  During this lesson, each student created a nonfiction writing goal and created a plan in reaching their goal.  Be sure to ask your child about their personal writing goal.
I am thrilled to see the excitement and enthusiasm around nonfiction writing! 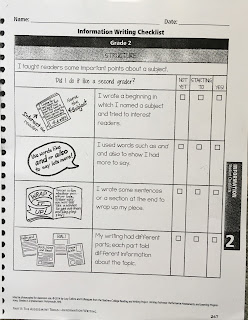 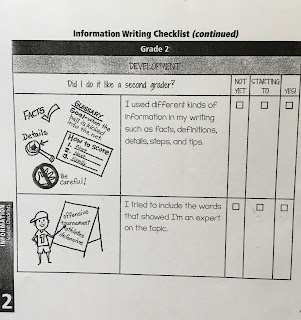 We recently launched our nonfiction unit during Reader's Workshop.  To begin this unit of study, I filled our meeting area with a variety of items, including a globe, a rocks/minerals collection, a human ear model, a microscope, and a photograph of "long ago" Yarmouth.  I shared that to begin this brand new reading unit, their job was to "read" our meeting area.   I encouraged the children to "read" whatever they saw in our meeting area that might tell them about our upcoming unit, to study the details and then put these details together to grow their knowledge of what the unit will be about.  The classroom was brimming with excitement as the kids became detectives, collecting information to solve the mystery of our next reading unit.
Throughout the first several minilessons,  I have used charts, photographs, and diagrams to encourage the children to do the important work that nonfiction readers do: pay attention to details, and put parts of the text together in their minds.  I shared that readers of nonfiction books do an "extra-brainy, intense kind of thinking"; that nonfiction readers pay attention to details and think, 'How can I put together what I'm seeing to grow my knowledge of this topic?'.
During these first few minilessons, the kids became fascinated with photos of "long ago" Yarmouth.  I used this as an opportunity to extend their learning with an activity that quickly became a big hit!  Each morning, I posted a historic photograph of Yarmouth on the whiteboard.  I encouraged the kids to pay close attention to the details in the photograph to grow their knowledge about the town of Yarmouth.  On the following day, I posted a present day photo of the same location, with the help of the Yarmouth Historical Society website.  The kids were extremely engaged in this activity, pushing one another to collect many details to grow their knowledge.
We will continue with our nonfiction unit for the next several weeks, focusing on how to best use text features in nonfiction books to learn more about the topic.
I am currently in the process of assessing and updating each student's reading goal set earlier in the school year.  Your child's new goal will reflect the work we are doing with nonfiction texts and will focus on strengthening his/her skill set in this genre.

Our classroom was brimming with excitement once again this morning, as the kids tackled their second STEM challenge of the school year.  As with the first challenge, the children worked with a partner to design, build, test and evaluate their solution to a problem as they became "Engineer Scientists."
We began the lesson by reading the book, Pilgrims of Plymouth, by Susan B. Goodman.  This led to a fabulous discussion about Thanksgiving, Pilgrims, Native Americans, and the Mayflower.  We learned that the Mayflower sailed to America in 1620, carrying 102 passengers, cargo, and crew.  Originally another ship, named the Speedwell, was intended to sail along with the Mayflower.  Sadly, the Speedwell was leaking, and therefore was deemed unseaworthy.  The passengers and cargo from the Speedwell were transferred to the Mayflower.  The Mayflower had to withstand fierce weather on the ocean, but also carry the weight of the additional passengers and cargo from the Speedwell.
This was a wonderful lead into "the problem" the children would be charged with solving.  I told the kids they had been commissioned to built a boat to replace the Speedwell on the voyage to America.  They were going to become boat builders, working to build the Speedwell II.  They would need to work with a partner using the provided materials to build a strong, sturdy boat that could hold lots of cargo and passengers.  Once construction was complete, each partnership would test their boat's strength by floating it in a tub of water and loading cargo bit by bit (pennies).
The kids were given the following materials and 30 minutes to construct their Speedwell II.
Materials:  10 Wikki Stix, 10 Popsicle Sticks, 5 Post It Notes, 5 Toothpicks, 5 Beads,
1 Piece of Tin Foil
We concluded this lesson by discussing why some boats held more pennies than others.  We "pushed our thinking" by looking carefully at the structure of the boats that were able to hold many pennies and discussed what was unique about these designs.
Each child posted both their drawn design and model to their SeeSaw portfolio.  Be sure to ask your child about the Speedwell II they created as they became a second grade engineer. 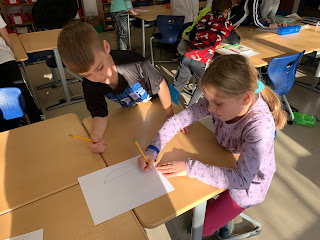 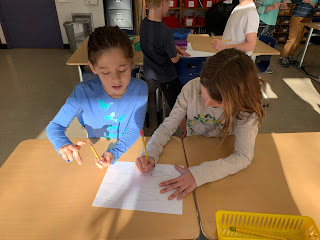 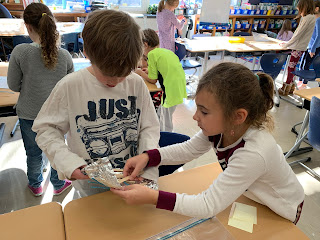 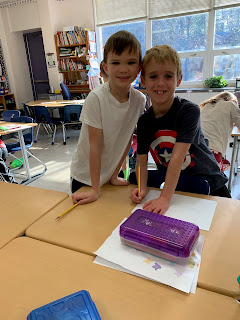 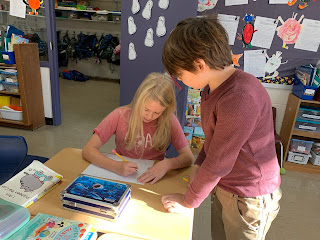 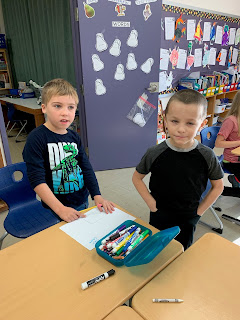 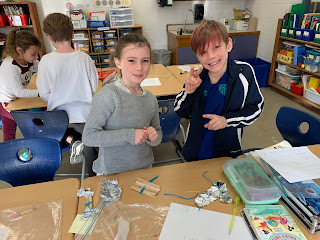 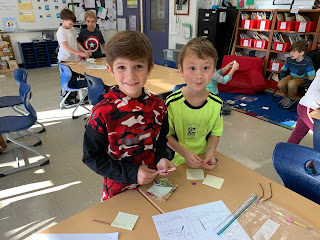 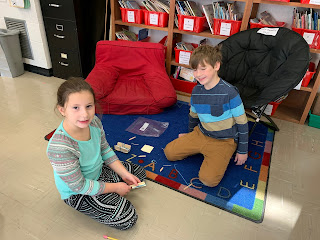 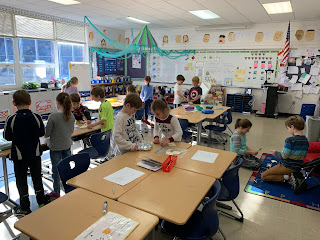 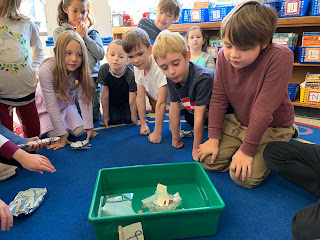 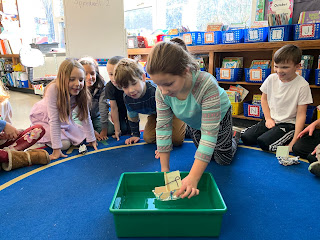 I am thrilled to be teaching second grade at Yarmouth Elementary School. I taught first and second grade in Freeport and Falmouth prior to coming to Yarmouth. This is my 20th year of teaching.
I live in Yarmouth with my husband and two children, Emma (age 16) and Ben (age 14) and our lovable dog, Milo. When I am not at school, I enjoy reading, running, and spending time with my family.